Intrauterine Foreign Body Or Osseous Metaplasia Of The Endometrium

Intrauterine foreign body is a rare complication and can occur after late first or second trimester abortion. The calcified fragment may work as an intrauterine contraceptive device causing infertility or may cause menstrual disturbances or pelvic pain. Hysteroscopic removal of the foreign body can be done or it may be removed by curettage. A case of secondary infertility was diagnosed to have a foreign body in the uterine cavity that may have been left behind after previous second trimester termination of pregnancy.

Many causes of secondary infertility exist. Uterine factors that may be associated with infertility are submucous fibroids, fibroid polyps, and uterine malformations. Rarely, retained foreign bodies may prevent endometrial implantation. In patients with previous history of abortion, retained bony products can get impinged into the endometrium.

A 27 year old woman cohabiting since 5 years with one previous abortion presented in the gynecology out-patient department (OPD) with infertility.  Her only pregnancy was a spontaneous conception 4 years prior. At 16 weeks of gestation in view of malformation incompatible with life, the pregnancy was terminated by an aspirotomy procedure, followed by uterine curettage. She had regular menstrual cycles and no major complaints apart from inability to conceive.
Detailed physical examination was done and there were no contributory findings. Abdominal examination was unremarkable. Speculum examination showed normal cervix and vagina. Uterus was normal in size, shape and mobility. Previous notes were assessed and uterine curettage procedure appeared to have been uneventful. Hormonal profile was normal, semen analysis parameters were normal and there were no coital problems.
Trans-vaginal ultrasound showed normal size and shape of the uterus with a well-defined focal hyperechogenicity of 1.5 x 1.5 cm and shadowing suggestive of calcification/ foreign body. Computed tomography (CT) of the pelvis was done. It was suggestive of 1 x 0.9 x 0.94 cm size calcified density in the uterine endometrial cavity suggestive of foreign body or an old calcified clot (figure 1 and figure 2).
Pre operative evaluation was done and all parameters were normal. A diagnostic hysteroscopy and laparoscopy was performed. On hysteroscopy, uterine cavity was normal, bilateral cornuae were visualized and endometrium appeared normal. A 1.5 x 1.5 cm sized calcified foreign body was seen in right anterolateral wall of the uterus close to the uterine fundus (figure 3). This was removed by curettage and sent for histopathological examination (figure 4). Endometrial curettage was also sent for histopathological examination. On laparoscopy, uterus, bilateral fallopian tubes and ovaries appeared normal. On chromopertubation, incidentally bluish discoloration of the myometrium was noted near the left cornual area probably suggestive of previous endometrial breach. However, bilateral free spill was seen. Patient was discharged on day 2 with advice to take oral ethinyl estradiol 0.05 mg twice a day for one cycle and then to undergo follicular monitoring with planned relation.
Histopathology of the curettage showed endometrial glands with compact fibrosing stroma with evidence of extensive calcification suggestive of osseous metaplasia in the endometrium. However, surprisingly, the other fragment of foreign body which was sent for histopathological examination (figure 4) could not be proven as human tissue and was reported as such and was discarded. 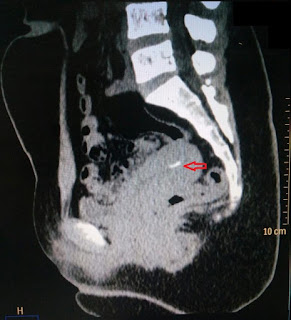 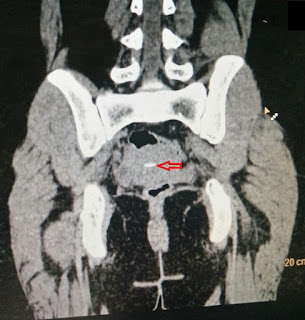 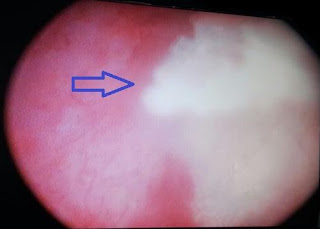 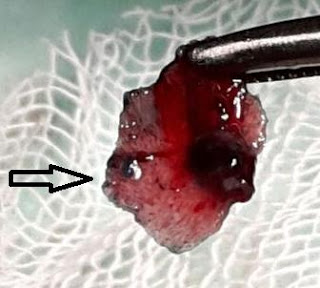 A varied range of conditions can cause secondary infertility. Ultrasonography (USG) is one of the primarily employed radiological modalities in the evaluation of infertility. Initially, our case was evaluated as per the standard protocol for infertility evaluation, wherein the unusual finding of intrauterine calcification was noted on USG. Such a finding could be suggestive of a foreign body, intrauterine contraceptive device, Asherman syndrome, or a calcified fibroid.[1] Rare disorders like heterotopic bone/ osseous metaplasia can also result in this finding.[2] Less than 100 cases of uterine cavity calcification due to various causes have been reported in current medical literature. A history of antecedent abortion was present in around 75% of the patients studied and almost 90% of the patients were identified with USG.[3] The symptomatology of such calcification depends on the underlying pathology. The order of frequency of presentation is infertility, menstrual abnormalities and pelvic pain. [4] Our patient had only symptoms of infertility. She did not report dysmenorrhea, menstrual problems or pelvic pain. Though 76% of patients with intrauterine fetal bones have infertility, the contribution of intrauterine fetal bones to infertility is very meager. In a 6 year study period in West Africa only 11 women had intrauterine retention of fetal bones.[5] The contraceptive effect of such retained foreign bodies is similar to other intrauterine contraceptive devices resulting out of poor endometrial implantation and local release of prostaglandins.[6] Occasionally patient may have forgotten about a previous insertion of an intrauterine contraceptive device in the remote past.  If the threads get detached, the condition can result in a diagnostic dilemma, requiring hysteroscopic evaluation.[7] Hysteroscopy is the standard modality for management of this entity, both for confirmation and for operative removal.[8] Makris et al reported a series of 2000 patients who underwent hysteroscopy for evaluation of abnormal uterine bleeding. Of these, only 3 patients had intrauterine foreign body. This exemplifies the rare nature of this condition.[9]
In our patient, the location of the retained fragment was in the antero-lateral wall, close to the fundus. This location is similar to that reported in the initial descriptions of such cases, wherein Dajani et al had reported that fundus was the most common location where retention took place.[10]
Our patient underwent only hysteroscopy and curettage. However, intraoperative USG to ensure completeness of curettage has been suggested.[11] In our case there was no cause found for infertility apart from the presence of the foreign body, which was removed. However, we do not know whether this was responsible for her infertility. Restoration of fertility has been reported to be a common sequel after complete removal of the foreign body.  In their review article, Pereira et al have reported that 55% of the patients conceived after the procedure.[3]
Histopathology of the curettage showed endometrial glands with compact fibrosing stroma with evidence of extensive calcification suggestive of osseous metaplasia in the endometrium. We presume that the calcified piece that was removed was a foreign body (figure 4) as the pathologist who processed it reported it as not of human origin though retained fetal bone should have been reported as human tissue. Unfortunately they did not process it further and discarded it. It is possible that this foreign body may have stimulated osseous metaplasia of the endometrium or maybe this piece is not a foreign body but has broken from the osseous metaplasia that is seen in the endometrium. Endometrial osseous metaplasia is a known but rare cause of infertility.[12] Dystrophic calcification, heterotopia, ossification of post-abortion endometritis, metastatic calcification, and prolonged estrogen supplement after abortion have all been cited as explanations for the endometrial osseous metaplasia The most accepted theory regarding the source of the osseous tissue is metaplastic change of endometrial stromal cells into osteoblastic cells which produce bone.[13]
Many advances have taken place since publication of possibly the first similar article in modern literature.[14]
This case report is presented to highlight that the treating gynecologist should consider osseous metaplasia and retained foreign body as an important differential diagnosis when endometrial calcification is detected on USG, especially those with history of second trimester abortion. With the only existing pathology causing infertility being treated, it is assumed that the patient would conceive in the near future, and is being followed as an outpatient.