Retroperitoneal fibrosis (RPF) is a rare disorder in which there is extensive retroperitoneal inflammation and fibrosis. It usually is over the lower two lumbar vertebrae, and spreads upwards. Retroperitoneal and pelvic fibroamatosis (RPPF) is a form of intraabdominal fibromatosis which is a slowly growing mass that may be asymptomatic or may cause pressure effects on adjacent structures. A case of generalized RPPF is presented, which was mistaken for RPF due to its generalized state rather than being a localized mass.

Albarran first described RPF in 1905. It is a rare disorder characterized by extensive chronic retroperitoneal inflammation and fibrosis, which causes obstruction of retroperitoneal structures like ureters, inferior vena cava, mesenteric vessels, and duodenal choledochal duct. It is often idiopathic, though an association with a number of conditions has been described. An immunological basis for RPPF is quite likely.[1,2] It is usually found mainly over the front of the fourth and fifth lumbar vertebrae. RPPF is a deeply situated fibroproliferative process in the retroperitoneum and pelvis, the cells being bland. Cellularity is variable. There are large areas of dense fibrous tissue. A case of RPPF mimicking RPF clinically is presented.

A 26 year old primigravida was referred to us from a private hospital for management of an unruptured ectopic pregnancy diagnosed with ultrasonography (USG). She had 1.5 months of amenorrhea. There was no pelvic or abdominal pain or bleeding per vaginum. Her past medical and surgical history was not contributory. Her vital parameters were in normal range. General, systemic, and abdominal examination showed no abnormality. A speculum examination showed normal cervix and vagina. Bimanual pelvic examination showed tenderness in the right fornix, a 6 weeks’ size uterus, and a 2 cm x 1 cm tender, soft, smooth-surfaced mass in the right fornix. The vagina felt normal An USG done at our hospital showed 1.8 x 2.0 cm sized right adnexal ectopic pregnancy and a 3x2 cm right simple ovarian cyst. There was no free fluid in the pelvis. Her urine pregnancy test was positive. Her serum β-HCG was 5296 mIU/ml. It was repeated after 48 hours, when it was 5319 mIU/ml. She opted for methotrexate therapy. She was given methotrexate in a dose of  Methotrexate 50 mg/m2 intramuscularly. Unfortunately she developed an acute abdominal pain 6 h later. An USG done at that time showed moderate hemoperitoneum. An exploratory laparotomy was done and the ruptured ectopic pregnancy was removed, after dissection from right sided tubo-ovarian mass. She made an uneventful recovery. Histopathological examination confirmed the diagnosis of tubal ectopic pregnancy. The patient was discharged on 5th postoperative day. She presented after 4 weeks with acute pain in right side of the lower abdomen. Her vital parameters were normal at that time. Abdominal examination showed no abnormality. Bimanual examination showed narrowing of the vagina from all sides, and relative fixity of the uterus. There was no pelvic tenderness or mass. A cervical swab was sent for microbiologic study and she was administered cefotaxime, gentamicin, and metronidazole parenterally, considering infection as the most likely diagnosis even in the absence of any fever or tenderness. There was no growth of any bacteria from the cervical swab. Her pain subsided after one day. A repeat examination after administration of the antibiotics for 5 days showed similar pelvic findings. A RPF was suspected and a contrast enhanced computerized tomography (CECT) was performed. It showed extensive fibrosis in the pelvis, lower retroperitoneum, and a hydronephrosis on the right side. The patient was referred to a urologist for further management. A double-J stent was passed on the right side cystoscopically, extending between the right renal pelvis and urinary bladder. A computed tomography guided biopsy was attempted, but did not yield adequate tissue. A laparotomy was done, but the entire pelvic structures were found to be involved in extensive fibrosis, and no structure could be identified clearly. A biopsy was obtained and the abdomen was closed. Histopathology of the specimen showed bland spindle-shaped cells in dense collagenous stroma. There was no evidence of any inflammation.  No mitotic figures or atypia was seen. A diagnosis of RPPF was made. Since surgical excision of such widespread tissue was not possible, the patient was offered tamoxifen therapy, which she accepted. Her hydronephrosis has resolved and she is currently asymptomatic, but longer follow-up is required to draw any meaningful conclusion about her therapy. 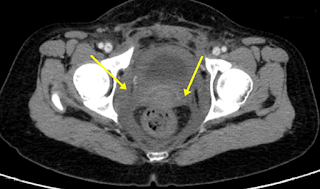 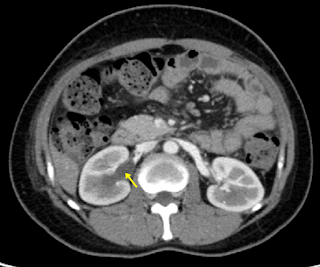 A patient with RPF presents with symptoms like poorly localized, dull pain in the back, flank, or lower abdomen,[3] fever, edema feet, malaise, anorexia, nausea, vomiting, and loss of weight. Some patients have deep vein thrombosis, intermittent claudications, Raynaud’s phenomenon, and ureteric colic. Association is known with ulcerative colitis, Crohn's disease, and sclerosing cholangitis. It is found to develop around an atherosclerotic aorta in response to the antigens of atherosclerotic plaques.[4] It may be secondary to infection, malignancy, retroperitoneal injury, or exposure to drugs like methyldopa, beta-blockers, and methysergide.[5,6] Genetic factors may be responsible for the development of RPF, as seen with the presence of human leukocyte antigen (HLA)–B27 cell marker in these patients.[7] Obstruction of retroperitoneal structures can be seen on excretory urography, contrast enhanced computerized tomography (CECT) of the abdomen, ultrasonography (USG) of the abdomen, and magnetic resonance imaging (MRI) of the abdomen.[8-10] A biopsy of the retroperitoneal tissue is diagnostic, the sample being obtained by laparoscopy or laparotomy. Early cases show an inflammatory infiltrate containing mainly lymphocytes, lipid-laden macrophages, and plasma cells amid numerous blood vessels. Late cases show acellular and avascular tissue with extensive fibrosis and scattered calcification.[11] Immunohistochemistry confirms the diagnosis.

RPPF occurs in women in the age group 15 to 40 years, most often between 20 and 30 years. As its origin is in the musculo-aponeurotic tissues, it can arise anywhere in the body. Lower genital tract is a rare site. Most common sites are abdominal wall, surgical scars, retroperitoneum and pelvis.[12-15] Causative factors are thought to be trauma (including surgery), Gardner’s syndrome, drugs and irradiation.[16-18] Most of the patients are asymptomatic, though some of them may present with some pain in the abdomen. Gastrointestinal bleeding or obstruction may be the presenting feature. Initial growth is often rapid, as was found in our case. Ureteric compression may lead to hydroureter and hydronephrosis, as was found in our case. Usually the ureteric involvement is unilateral. But considering the widespread fibrosis, the other ureter was considered likely to get involved some time or other in our case. Radical surgery is the most effective form of treatment known for RPPF.[19] The condition is believed to be hormone dependent, as it occurs mainly in fertile women in the reproductive age group. Presence of high affinitiy antiestrogen binding sites have been described on RRPF.[20] There are many reports of patients responding to antiestrogen tamoxifen.[21] Cytotoxic chemotherapy, NSAIDs, steroids, and interferons are also believed to be useful in the management of RPPF.[22-26] Since recurrence is likely to occur despite complete excision with disease-free margins, prolonged follow-up is required in cases of RPPF.

The case presented here was unique in that the extravaginal pelvic fibromatosis developed rapidly in a period of three weeks. It was accompanied by abdominal colic, which was possibly due to ureteric obstruction. Pelvic fibromatosis was extensive, and enveloped the vagina on all sides, but did not affect the urethra or the bladder neck. It developed soon after a laparotomy and salpingectomy for an ectopic pregnancy. However the surgery was brief and did not involve more than minimum tissue handling. So it cannot be stated with certainty that RPPF was due to the surgery. Normally the condition is diagnosed on investigations of varied symptoms, but is not detected clinically because the retroperitoneum cannot be palpated. In the case presented it was detected clinically because the vagina was easily accessible for examination. Since the patients of RPPF usually present to surgeons and/or urologists, a vaginal examination is usually not performed on them. It is possible that a number of such patients have findings of RPPF. It is recommended that all patients with RPPF should undergo a bimanual pelvic examination to see if the pelvis is involved, not only because it would be of interest, but also to detect if it causes bladder neck or urethral obstruction.