Mullerian tract anomaly is found in 2-3 % of women.  An 18 year old woman with recurrent dysmenorrhea was referred to us. Two years before referral, she presented to another consultant gynecologist with the same symptoms and at that time a laparotomy was performed because of suspected endometriosis. During surgery, unicornuate uterus with right rudimentary horn, with right hematometra was found and the hematometra was evacuated. Recently, dysmenorrhea symptoms recurred and the patient presented to us. On physical examination we found a uterine enlargement with no vaginal bulge. On ultrasound a unicornuate uterus with right rudimentary horn with a normal left uterine cavity and cervical canal was seen next to a hematometra and hematosalpinx on the right side. Intravenous pyelography revealed absence of the right kidney. We performed a right salpingectomy and excised the right uterine horn on laparotomy. On six months follow up, no recurrence of symptoms or pathology was found. The initial diagnosis was challenging due to rareness of Mullerian tract anomaly. In such a case, with history of conservative surgical treatment, we suggest a horn removal and salpingectomy.

An 18 year old woman was referred to our center due to recurrent, progressing dysmenorrhea. Her menarche was at 14 years of age. Two years prior to referral to our center she had presented to a gynecologist with dysmenorrhea especially in the right lower quadrant. She was diagnosed as having an endometriotic cyst and underwent a laparotomy. During surgery the gynecologist found a right sided hematometra in an unicornuate uterus with right rudimentary horn. The hematometra was evacuated. After surgery her menstrual cycle was suppressed with medical treatment. She received a gonadotropin releasing hormone (GnRH) analogue for the first 6 months and then she was continued on an oral combined contraceptive for a further period of six months.  With resumption of her menstrual cycle after finishing her treatment, dysmenorrhea symptoms recurred and the patient was referred to our center.

At physical examination an abdominal mass arising from the pelvis, 2 fingers below the umbilicus was detected. Vaginal examination was not done since the patient declined a history of intercourse. Rectal examination showed no vaginal bulge but an enlarged unicornuate uterus of 18 weeks of gestational age size was felt. On ultrasound examination an unicornuate uterus with right rudimentary horn was seen. The left horn of the uterus showed a normal uterine cavity and cervical canal, while the right horn was found to have a hematometra and a hematosalpinx on the right side.  A cervical canal was not visible in the right rudimentary horn and there was no apparent connection between the right and left horns. Our analysis was that the right hematometra and the right hematosalpinx correlated with an outflow tract obstruction from the right horn (figure 1). Right kidney was not visualized on ultrasound examination. Absence of the right kidney was confirmed by intravenous pyelography. 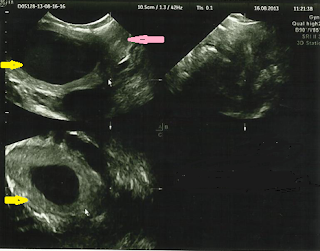 A laparotomy was performed. A hematometra of  20 x 12 x 10 cm was seen in the right uterine horn and a right hematosalpinx measuring 15 x 8 x 6 cm was found. The uterine corpus of the left horn, left tube and both ovaries were normal. The right uterine horn had no cervical part and it had no connection to the left uterine horn. The right horn was completely separated from the left unicornuate uterus by a well-established myometrium (figure 2). We performed a right salpingectomy and right horn was excised.
The histopathology result of the excised right rudimentary horn was chronic endometritis and adenomyosis. The right salpinx showed chronic salpingitis and hydrosalpinx with external endometriosis. The histopathological results also confirmed that macroscopically and microscopically, there was no cervical or vaginal part of the right horn.
The patient had an uncomplicated post-operative recovery and was discharged in good condition two days after surgery. On six month post-operative evaluation, there was no recurrent symptom, and no pathology was found in clinical or ultrasound examination.

We found right sided hematosalpinx, ipsilateral hematometra in a case of unicornuate uterus with right rudimentary horn, and ipsilateral renal agenesis. There was no cervical part on the right rudimentary horn. The right horn was completely separated from the left unicornuate uterus by a well-established myometrium. The diagnostic method used in our case was ultrasound imaging and intravenous pyelography. Others recommend magnetic resonance imaging and laparoscopy for establishing the diagnosis of Müllerian tract anomaly.[2,3,4] 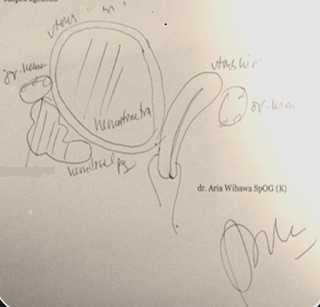 The primary management target in our case was to relive symptoms, repair the anatomical malformation, and preserve fertility function. Since we were preoperatively informed through physical and ultrasound examination about the absence of a connection between the right horn and left unicornuate uterus, we knew that metroplasty was not an appropriate option as there was no connection with the left uterus. Considering the recurrence of symptoms after her first surgery and the pathologic findings, we decided to perform a right salpingectomy and removal of the right horn. This was also done in several other reports in which unicornuate uterus with hematometra in the rudimentary horn was found besides the ipsilateral hematosalpinx. The horn removal was also done in our case, along with salpingectomy.[2,3,4]

Our case was a right rudimentary horn hematometra and right hematosalpinx and normal left unicornuate uterus with right sided renal agenesis. As we found no complaint and no pathology on six month follow up, we suggest to perform a horn removal and salpingectomy for such case with recurrence of symptoms despite  previous conservative surgical treatment.