Paravaginal hematoma is a rare complication of vaginal delivery that can occur during delivery, just after delivery or late in puerperium. Various predisposing factors such as precipitate labor, instrumental delivery and trauma have been suggested. We report an interesting case of spontaneous asymptomatic paravaginal hematoma that developed in a woman who had a full term normal delivery.

Paravaginal hematoma is a rare complication of vaginal delivery. It can be life threatening if not recognized and managed quickly as the patient can lose a large amount of blood in a short time. We report a patient who was incidentally diagnosed with this complication after undergoing a full term normal delivery.

A 25 year old para 3 living 3 presented to the outpatient department (OPD) for postnatal follow-up on day 22 of full term normal delivery. She gave non-specific complaints of difficulty in micturition but no other specific complaints. She did not give history of excessive bleeding per vaginum, foul smelling discharge or any bowel disturbances. There was no history of sexual intercourse after delivery.
On general examination her pulse was 70 beats per minute, blood pressure was120/70 mm of Hg and there was no pallor. Systemic examination was unremarkable. Abdomen was soft and no masses were palpable.  On local examination, external genitalia appeared normal and no swelling or redness was seen. On speculum examination a mass arising from the right vaginal wall, reaching and almost encircling the introitus was seen. It was bluish in color.  The cervical os could not be visualized. There was no bleeding or lochia. On vaginal examination, a mass was felt arising from right lateral wall of the vagina about 7 x 7 cm, which was non-tender, firm to cystic in consistency, with restricted mobility, and occupying the pouch of Douglas, but not extending anteriorly.  It was not possible to reach the upper edge of the swelling. The uterus was not felt separately, was about 8-10 weeks in size and was slightly deviated to the left side. The left fornix was free..
She was admitted and her case records were reviewed. She had a normal antenatal course. Her previous 2 term pregnancies were uneventful. Registration hemoglobin (Hb) was 13.1 gram % and pre-labor Hb value was 12.4 gram%. Labor onset was spontaneous at 38 weeks of gestation. First stage of labor lasted for 5 hours and second stage lasted for 30 minutes. No intervention was required. There was no evidence of precipitate labor. No episiotomy was given. There was no fundal pressure applied and a male child of 2.75 kg was born with apgar score of 9/10. Placenta delivered spontaneously and completely. Uterus was well contracted and there was no evidence of abnormal blood loss. There was no vaginal or perineal tear. She had no difficulty in micturition and defecation. She was discharged on day 4 of delivery.
Currently, she was admitted for evaluation of the hematoma. Bed side coagulation tests were normal and laboratory coagulation profile was within normal limits. Hemoglobin was 10.1 gram%. These tests were monitored serially and remained normal. Urine and stool examination were normal. Vaginal swab culture also did not show any growth. Ultrasonography (USG) was suggestive of organized hematoma in the right adnexal region extending upto the perineal region, with a volume of around 120 cc. Magnetic resonance imaging (MRI) of the pelvis was done. It was suggestive of approximately 10 x 8 x 8 cm sized organized hematoma postero-inferior to the uterus and inferiorly it was extending to the pelvic floor. No uterine injury was seen (figure 1). 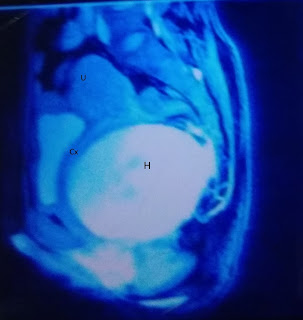 Figure 1. MRI of the pelvis. U is the uterus, Cx is the cervix and H is the hematoma.

She was started on parenteral antibiotics (piperacillin-tazobactam, metronidazole and gentamicin). In view of her stable condition and no specific symptomatology, she was managed conservatively. She followed up in the OPD fortnightly. She remained symptom free. USG was repeated. At 2 months post-delivery, the volume of the hematoma had reduced to around 75 cc (figure 2) and at 4 months post-delivery, the volume had reduced to 30cc. She was advised to follow up in future if required. She did not report any problems with sexual intercourse, which she resumed around 3 months after delivery. 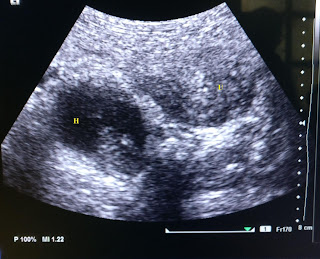 Figure 2. USG pelvis. H is Hematoma. U is uterus.

The incidence of puerperal hematomas has been reported to range from 1 in 300 to 1 in 1000 deliveries.[1] In a retrospective observational study conducted by Genre et al, the estimated incidence of pelvi-abdominal hematomas was 1/4200 deliveries.[2] Primigravid status, episiotomy, instrumental delivery, hypertensive disorders , multifetal gestation, large fetal size, obstructed labor, use of uterine fundal pressure in second stage of labor and vulvo-vaginal varices have all been described as high risk for puerperal hematomas.[3,4,5]
The presentation of an episiotomy hematoma can be catastrophic, wherein the patient may present within few hours of delivery with features of shock and collapse. Local examination would generally reveal a massive tender swelling in the vulvo-vaginal area. Inability to achieve hemostasis in the episiotomy suturing is the most important cause. Classically, there is vaginal bleeding in this condition. In anatomical parlance, this qualifies as an “infra-levator” hematoma. When a paravaginal “supra-levator” hematoma occurs, a broad ligament hematoma usually forms and massive collection of blood in the retroperitoneum results. This occurs in the absence of any vaginal bleeding. Such a hematoma occurs due to avulsion of paragenital connective tissue. The condition is also characterized by deviation of the uterus to the contralateral side. The condition may be slow in evolution, depending on the vessels involved. The blood loss can be extensive; and the extensive vascularity of the uterus contributes to this. Rupture of various vessels supplying the genital organs has been implicated in various individual cases in medical literature. Rupture of the uterine artery after a spontaneous delivery necessitating laparotomy has been described by Becker et al.[6] Extensive Retzius space hematoma following spontaneous delivery has been reported by Fieni et al.[7] Spontaneous rupture of an ovarian artery aneurysm causing massive retroperitoneal hemorrhage has been reported by Enakpene et al recently and Guillem et al previously.[8,9] Psoas muscle hematoma following an uncomplicated vaginal delivery has also been described.[10] Puerperal hematoma arising from rupture of internal iliac artery has been described by Egan et al.[11] It is clear that any of the extensive vasculature present in the paravaginal connective tissue can lead to the formation of such hematomas, and the presentation could be dramatic and in the immediate postpartum period. However, in our case the hematoma was detected only on day 22 of delivery when she came for a regular visit. It was detected during a routine follow up, on pelvic examination.  Such a late presentation has not been reported widely. This suggests a slowly developing venous bleed in the paragenital tissues. After admission she had no tachycardia, hypotension or anemia. Hemoglobin did not drop further.  This indicated that the hematoma had stabilized and was not expanding. A major vessel rupture was unlikely in our case, and the venous bleeding which took place was probably self-limited by its own pressure on the surrounding fixed structures and other natural hemostatic mechanisms. Her follow up as an outpatient showed the gradual resolution of the hematoma.
Management for puerperal hematomas include minimally invasive vascular interventional procedures. Temporizing measures such as tamponade using Bakri balloon have also been described.[12] Angiography followed by selective arterial embolization of the bleeding segment have been done.[13,14 ] Hemodynamically stable patients may be considered for ultrasonographic guided aspiration of the collection, as described by Mukhopadhay et al.[15] Inability to specifically identify the bleeding vessel and need for repeated procedures are drawbacks in this technique.
However when such methods are employed, patient needs to be continuously monitored. In the event of further deterioration, the patient may require operative measures. The conservative operative measures include surgical evacuation of the hematoma, identification of any bleeding vessel, followed by ligation, step-wise devascularisation of the uterus. None of these procedures were required in our case.
To conclude, this case is being presented to highlight that puerperal hematomas may occur even in the absence of any specific risk factors. These may present late, remain asymptomatic and may be amenable to conservative management.